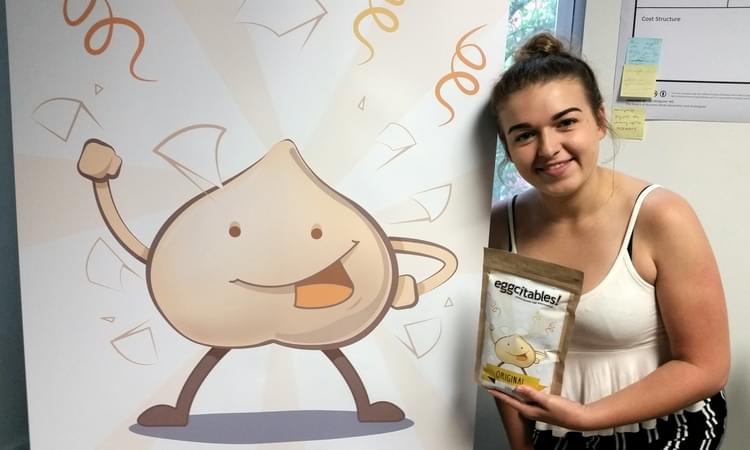 Hannah Chisholm is allergic to eggs, so creating an egg substitute did not come easily.

“I don’t know what an egg tastes like,” she said.

But with the help of food scientists at Perennia Innovation Centre in Bible Hill, N.S., who assist food-based start-up entrepreneurs like herself, the 22-year-old came up with a new product she hopes a University of New Brunswick program will help her launch on a wider scale.

The plant-based egg substitute is called Eggcitables! It’s a powder that’s mixed in water, then fried like an omelette or used in recipes that call for eggs.

Chisholm, from Antigonish, N.S., recently graduated from her hometown St. Francis Xavier University with a bachelor of business degree in entrepreneurship.

Having been allergic to milk, eggs, nuts and shellfish all her life, she said she has a good understanding of alternatives on the market.

Three years ago, when she was first looking around, she said she couldn’t find an egg substitute.

“Veganism became very popular, so I asked myself ‘Why isn’t there an egg alternative available?'”

Chisholm did some research and found chickpea flour works well enough “to make like a fake omelette, essentially.”

“It didn’t really taste that great the first time, so I started playing around with ingredients and came up with a recipe I used for myself for the next two years.”

By May 2017, she thought her vegan formula had potential as a business concept. She worked with the Perennia Innovation Centre to come up with a final product.

“They helped me improve the taste and texture,” Chisholm said.

She added nutritional yeast, “which has a cheesy kind of flavour,” and black Himalayan salt, “which gives the product a sulfury smell and an egg-like taste.”

Chisholm began serving up samples to friends and strangers.

“Honestly, the most common reaction I get is: ‘Wow, that actually tastes like an egg,’ or, my favourite: ‘I like this way better than eggs.’ So the feedback has been really great.”

Chisholm’s egg start-up is now one of seven companies completing UNB’s Summer Institute accelerator program this week. The 12-week program for aspiring entrepreneurs wraps up Thursday evening at 6:30 p.m. with a showcase at Picaroons Roundhouse.

The Summer Institute “helps you understand where your business fits in the marketplace, and how to develop strategies for marketing and distribution,” she said. “Over the course of this program, I’ve talked to probably 200 different potential customers about my product.”

The institute is just the latest to take a chance on Chisholm.

In January, she won first place in the 100 Seeds Atlantic pitch competition, earning $10,000. She was awarded an additional $4,000 during the BMO Apex Business Plan Competition at UNB.

In May, Chisholm was chosen for a 2018 HSBC Woman Leader of Tomorrow Award by student leadership, development organization, Enactus Canada.

“I was a little bit surprised because, of course, I’m not a technology company,” she said.

“Once I get some sales, repeat customers and traffic on the social media sites, I’m going to transition into trying to get into independent health food stores,” Chisholm said.

“I’d like to focus on the Atlantic Canada region and then expand to the rest of the country in time. That’s the plan.”