As we enter a new decade, it seems like everything on the world stage, both good and bad, has been leading up to this moment. New scientific discoveries are being made faster than ever before, the world (or at least its younger generations) is finally backing climate change, and there are even massive worldwide protests both for and against the issue. Dictatoresque politicians are getting elected, but there are also glimmers of hope coming out of countries such as New Zealand and Slovakia where the leaders are focused on the betterment of humanity and the growth of innovation and sustainability in their respective countries and worldwide. We have been warned to look out for another economic recession, but the innovation ecosystem, especially in the biosciences, is booming now more than ever.

In terms of world news, it is easy to remain inside your own filter bubble; which is the bubble that is created by internet algorithms that show you things you are predicted to like and things similar to what you have engaged with in the past. Your filter bubble may make things seem as though there are only bad things happening across the globe. However, this last decade, while challenging, has also given us many inspiring stories.

In 2019 alone, we hired on 3 new staff members, appointed a truly great Executive Director, Jennifer O’Donnell, while our previous E.D., Meaghan Seagrave, went on to be the president of our subsidiary company, 1812 Hemp.

55 bioscience companies have started in NB since 2009. They include:

Canada’s Bioeconomy Strategy was also released and the BioDesign consortium received funding to move forward with BioNB and 4 other partner organizations; Bioindustrial Innovation Canada, Forest Products Association of Canada (FPAC), FPInnovations, and BIOTECanada. The BioDesign team is an industry-led consortium of companies, associations, academic and research institutions from several sectors that is focused on using the potential of Canada’s natural resources to accelerate Canada’s transition to a sustainable, low-carbon society.

The innovation ecosystem is growing and that’s evidenced by things such as the “Industry & Innovation” in New Brunswick piece released in December 2019. It showcases many innovative projects around our province including the massive undertaking by Ignite Fredericton and the new Cyber Centre of Excellence, the first of its kind in Canada. 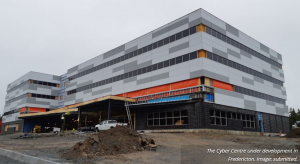 While there were several organizations missing from it (including us), the New Brunswick Innovation Map was released which “allows us to see where and how R&D takes place right here at home, enabling us to collaborate more efficiently and effectively in using the assets and resources available.”

This year’s winner of BioNB’s New Brunswick Bioscience Achievement Award was anessa. “anessa is a software company specializing in the biogas industry that has developed robust and sophisticated software products to assist clients in assessing, validating and operating anaerobic digestion plants.” 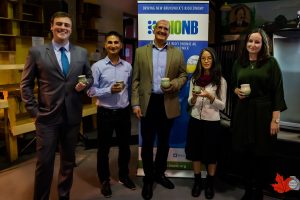 This year also saw our Executive Director, Jennifer O’Donnell, become the non-profit representative on the board of Canada’s Ocean Supercluster! Canada’s Ocean Supercluster (OSC or Ocean Supercluster) is the first cross sectorial initiative of its kind, which includes the shared vision of leaders in fisheries, aquaculture, offshore resources, shipping, defense, marine renewables and ocean tech. By facilitating the growth of these industries through an interconnected cluster, we’re positioning Canada to be the leader in sustainable ocean innovation.

It was also a big year in Cannabis, and not just for BioNB and 1812 Hemp. We know that the innovation coming out of that industry and New Brunswick companies, such as Organigram, will have far-reaching benefits to not just the cannabis industry, but to our more traditional New Brunswick sectors such as agriculture and forestry as well. Brennan Sisk was also placed into the role of Provincial Cannabis Coordinator for New Brunswick who will help bring the stakeholders together and move forward together. Moncton also came together in a big way at Université de Moncton in creating their Cannabis Innovation and Research Centre.

These are just a few examples of the things happening with us and New Brunswick. If you look to our neighbours in Atlantic Canada, just as many incredible things are coming out of those provinces as well from organizations such as Venn, Springboard Atlantic, Scientists of the Maritimes, Canada’s Ocean Supercluster, BioNova, Nova Scotia Innovation Hub, Genome Atlantic, and PEI BioAlliance. As Entrevestor put it, “something is happening in life sciences in Atlantic Canada, which was far and away the most exciting segment of the innovation economy in the first quarter of 2019. In the three months to March 31, biology-focused companies raised $74.3 million in equity funding, filed a prospectus for a stock market listing and announced a $145 million plant expansion. Behind those headline items, things are happening that should support the long-term outlook for the sector.”

We look forward to a new decade and a new dawn of innovation and worldwide progress. We are extremely happy to a part of such a supportive and open and innovative ecosystem and we look forward to working, even more, to advance the biosciences and bioeconomy with the help of all of you and our various project partners.

We aim to be the champion that moves forward New Brunswick’s bioscience sector, but we couldn’t do that without the help of our provincial, national, and worldwide supporters. “To foster bioscience and the bioeconomy in New Brunswick by providing leadership and support to increase research, development, and commercialization capacity in the province” is our mandate and we look forward to continuing this mission with all of you in 2020 and beyond.

If you want to know more about what BioNB has been up to over the last year, need advice on a potential project, or just want to have a chat a catch up, reach out. We would love to hear from you and what great things you are doing! You can contact Andrew Byrne, our Marketing and Communications Director anytime at abyrne@bionb.org