THE ART AND SCIENCE OF BREWING: MEET MIKE DOUCETTE OF THE BIOREFINERY TECHNOLOGY SCALE-UP CENTRE

Part of the "Under the Microscope" Series admin September 26, 2014

Beer brewing is both an art and a science.

Mike Doucette and the team at the Biorefinery Technology Scale-Up Centre (BTSC) understand that you must embrace both sides of the process to achieve the quality, subtlety, and consistency that our favourite alcoholic beverage deserves. The BTSC has brewery and distillery lab testing services that address a real need in the microbrew industry – not only in New Brunswick but across Canada. The team can conduct hop oil analysis, grain analysis, bitterness tests, and other work to help raw material growers and brewers fine tune their processes. They have spent the last few years working with individuals and companies regionally and nationally, and are seeking new interesting projects.

Alcohol brewing dates back to the 6th millennium B.C. and has been a staple in many cultures since then. The brewing industry is now big business comprised of several multinationals and many thousand microbreweries that embrace regional flavours and techniques. New Brunswick is home to a number of microbreweries like Picaroons Traditional Ales and Pump House Brewery, and Mike and the BTSC are prepared to collaborate to help build a thriving brewing industry in the province.

The BTSC operates out of the Collège Communautaire de Nouveau-Brunswick in Grand Falls. They support New Brunswick`s biotechnology industry by giving researchers and companies the opportunity to test their product or process at near production scale, helping validate their technology before undertaking commercial production. “This isn’t nitty gritty test tube science”, says Mike. A number of the BTSC’s projects have reached commercialization including work in biogas, manufacturing, and brewing. (Pictured below: hops in their raw form) 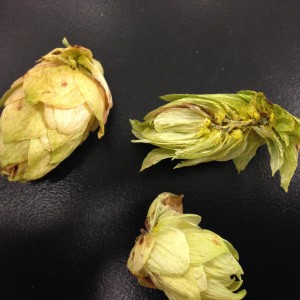 Since its inception in 2010, the BTSC’s projects have focused on creating high value industrial bioproducts from forest, agriculture, marine biomass, and even waste streams. Of their dozen-or-so current projects a quarter of them are related to alcoholic beverages. This portion is only growing and Mike couldn’t be happier.

Mike has a background in chemistry and used to brew beer as a hobby. “Beer is about the flavour and the experience”, says Mike. “People don’t know why a beer tastes like it does, but I do!”. Mike and his fellow technicians understand what is happening at every stage of the brewing process. Minor differences in oxygen levels, temperature, and timing have big effects on the final product, and brewers come to the BTSC to correct errors, discover new flavours, and achieve product consistency.

There is an art to brewing beer that involves developing one’s own brew based on taste and experience through trial and error. But there is also sophisticated science behind every step in the process, and the BTSC is hoping to get the province’s microbreweries on board. “Understanding what is happening gives you control over the process and gives you room to experiment”, says Mike. “Understanding the science removes the fear of making mistakes”. As a self-described beer snob, Mike is happy to see New Brunswickers warming up to the idea of craft brewing. “As New Brunswick’s beer snobbery grows, the demand for our services will grow!”.

A Cultural and Economic Hole in One

Building a brewing industry in New Brunswick makes economic sense. Crop rotation for our potato farmers means half of the time they grow barley or other grains and sell them for next to nothing as animal feed. New Brunswick’s climate produces a protein rich barley that large malteries won’t accept. Mike feels this grain could be sold to micro-malters who are more equipped to take a risk on new flavour characteristics. Local barley, along with NB- grown hops and other materials, can produce unique flavours in the beer, which Mike hopes will help establish a unique terroir for New Brunswick beer. (Pictured below: different grain varieties used for brewing) 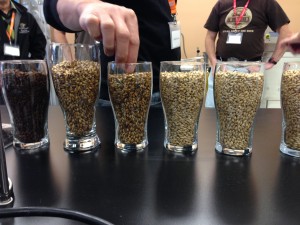 The beer world is vast and interesting, rich with many of the subtleties and varieties of wine. Sour German beers (Berliner Weisse) are currently gaining popularity, the Belgians have their fruity lambic beers, the USA have their extreme IPAs, and New Brunswick has every reason to develop its own regional flavour and character.

The BTSC is at the centre of this growing movement and has worked with governments, other public research institutions, and private producers to take on projects that will develop innovations for the province as a whole. They’ve collaborated on dozens of ground-breaking projects and have established a reputation for innovative thinking and quality work. They have the practical approach to innovation this province needs, and it’s time we took notice.