Read the full story at telegraphjournal.ca

And unfortunately, the pesticide used to control the Colorado potato beetle might be hurting other helpful insects like bees.

Fortunately, Helen Tai, a research scientist with Agriculture and Agri-Food Canada, and her colleagues at the Experimental Farm on Lincoln Road may have a solution – two new varieties of spud with leaves the Colorado potato beetle finds disgusting.

“It’s also very exciting to be able to provide something for the industry that could be beneficial.”

Tai, her colleagues, and her predecessors have been working for 30 years to cross commercial potato plants with their wild potato cousins from South America to produce leaves that repel the Colorado potato beetle.

They now have two varieties ready for commercial testing.

The next step is for the potato-growing industry to try the new potato varieties, she said.

“It’s not easy for industry to take a new variety, grow it up, and find the right growing conditions,” Tai said. “Somebody has to take a risk.”

Consumers also need to be thinking about the potatoes they are eating, she said.

“What kind of a … fry do you want to have? Do you want something which you know is more environmentally sustainable in its production?”

In a greenhouse at the Experimental Farm is Tai’s Colorado potato beetle nursery, with rows of small boxes containing commercial potato plants and beetles in various stages of life.

The beetle feeds on leaves in the both larval stage and the adult stage, and sometimes in New Brunswick the beetle can go through its life cycle twice in one season, she said.

The beetle comes from Mexico, but it has adapted to New Brunswick’s climate and is common here.

“Where ever the potato grows the beetle will follow,” said Tai. “It can burrow underground below the frost levels and come back out of the ground later on.”

That makes the Colorado potato beetle hard to control, she said.

“You can see 30 to 50 per cent loss in yield with the Colorado potato beetle so we’re very motivated to try and find some resistance,” said Tai.

Tai said the timing to try the new beetle-resistant potatoes could not be better.

The public is starting to get concerned about pesticides used to control the Colorado potato beetle, said Tai.

If that concern keeps growing then eventually farmers may not be allowed to use such pesticides on potatoes, she said.

“Without some controls the growers would not see profitable yields,” she said. “This would have a huge economic impact on this province and a lot of the other potato-growing regions in Canada.”

“It would be great to incorporate some of these sources of resistance into the potatoes that we are currently growing in the province so we can reduce pesticide use and increase yields.”

The beetle-resistant potato would also save farmers money if they could use less pesticides, she said.

Tai stresses this isn’t genetically-modified food and is totally natural. 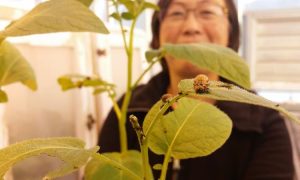 A Colorado potato beetle on a leaf at the Experimental Farm on Lincoln Road’s greenhouse beetle nursery and researcher Helen Tai in the background. Tai and her colleagues have developed a beetle-resistant potato variety. Photo: Stephen Llewellyn/The Daily Gleaner