Oh What A Night!

September 18 (Saint John) – Approximately 50 persons were in attendance at a 3-hour event celebrating National Biotechnology Week in New Brunswick.  The event took place at the Saint John campus of the University of New Brunswick. The provincial government’s bioscience sector strategy was released by Agriculture, Aquaculture and Fisheries Minister Michael Olscamp.  Minister Olscamp noted that bioscience companies are important employers throughout New Brunswick, consisting of 55 companies with a payroll of $9.3 million. Export sales in biosciences totalled 166 million between 2008 and 2011. 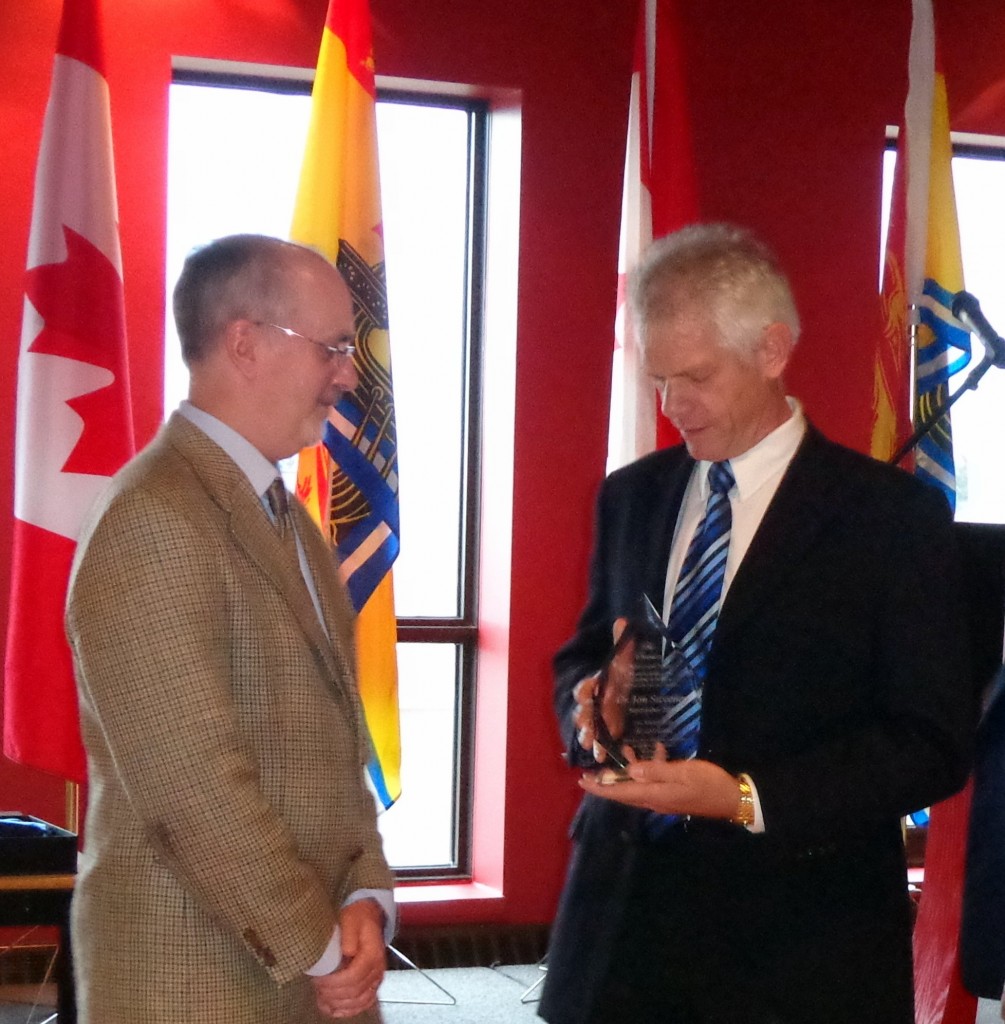 The event also honoured the recipient of this year’s New Brunswick BioSciences Achievement Award. Dr. Jon Sweeney, of the Canadian Forestry, in his efforts to support to major insect outbreaks in the Atlantic region for three decades. In particular, his work in support of reducing the spread of the brown spruce longhorn beetle has been phenomenal.  The brown spruce longhorn beetle is an invasive forest insect from Europe that infests spruce trees. Their larvae weaken the tree and, once infested, the trees are re-infested every year until they die – usually between one and five years from infestation. The insect entered the country via the Port of Halifax on pallets from Europe and established itself aggressively in Point Pleasant Park. The impact was strongly exacerbated by Hurricane Juan.

Sweeney was being recognized for his work on that and other invasive species over a 30-plus-year career. He’s studied the insect’s ecology, biology and behaviour to figure out what can be learned and then expanded into survey tools for identifying and confining the insects. For example, they have identified beetle pheromones and found ways to use synthetic versions of those pheromones mixed with other substances to increase the detection and attraction rates of the beetles.

“Biotechnology is a sector that weathered the recession relatively well, and growth has been steady in New Brunswick despite the downturn in 2008,” said John Argall, executive director, BioAtlantech. “Mostly, this is because the sector is an adjunct to our core natural resource sectors.”

The event was held by BioAtlantech and its partners, which include Rx&D, the provincial government, the Atlantic Canada Opportunities Agency and the University of New Brunswick.  . It was part of a series of coast-to-coast celebrations honouring National Biotechnology Week.